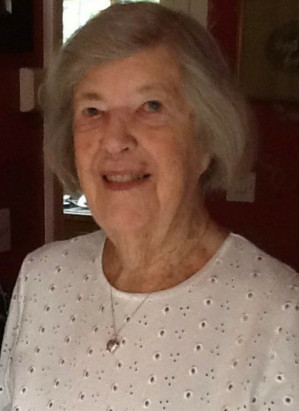 This obituary is protected by copyright by MacCoubrey Funeral Home Limited. Proudly serving Northumberland County in the province of Ontario, Canada. All rights reserved.

Joan died peacefully on Wednesday, January 4th in Port Hope, Ontario. Joan was born August 17, 1925 in Cardiff, Wales to Ivy Florence (nee Druce) and Victor James Baber. She was the oldest sibling to brother Keith Druce Baber (1929 – 2003) and sister Patricia, who died shortly after birth in 1927. The family moved to Southampton in 1932 where Joan attended school. She attended teacher’s college and taught English and Physical Education after graduation. During the war, she and her brother were evacuated from Southampton. After the war, she was a member of the Theater Guild in Southampton, where she met Jack Winter Read, a dashing, young architect. Jack and Joan married in 1953 and together they raised Judy, Andrew, and Sarah. In 1967, the family moved to North America – first to Moncton, New Brunswick, then to Concord, Massachusetts, before returning to Canada to live in Ottawa and then Cobourg, where Joan and Jack spent the remainder of their lives. Joan completed a BA at York University, followed by an MA from Queens. In Cobourg, Joan worked for the Northumberland County Board of Education, where she introduced the first computers into the school library system. For many years, she taught summer classes in Library Science at the University of Western Ontario. Outside work, Joan enjoyed tennis, golf, gardening, crosswords, was an avid reader, volunteered with UNICEF, and was a long-standing member of the Ontario Library Association. Following retirement, she volunteered with the Art Gallery of Northumberland. The Read family always had pets in the house and, during the last years of her life, Joan’s cat Lucy was always at her side or on her lap. Joan was preceded in death by Jack, who died in 2014, and is survived by her children Judy, Andrew, and Sarah, beloved grandchildren Kara, Lauren, Jenny, Amanda and three great grandchildren. The family is extremely grateful for the excellent care Joan received at Extendicare in Port Hope during the last year of her life and especially for the love, kindness, and support provided by her caregiver, Danielle Greenhorne, who has been part of the Read family for more than a decade. The family will celebrate Joan’s life in a private ceremony. Arrangements have been entrusted to MacCoubrey Funeral Home 30 King St. E. Cobourg and condolences will be received at www.MacCoubrey.com.

Note: Your message of condolence will appear at the bottom of the page.
MacCoubrey Funeral Home Ltd. reserve the right to delete or remove any comments we find inappropriate or offensive

Rest in piece Joan, we are thinking of you. Love Dot & Dave

To Judy, Andrew and Sarah, sending condolences on the passing of your Mom. I know that losing a parent is hard, no matter one’s age. I will always be grateful for the time and wonderful conversations Joan and Lucy and I shared over the three years I “friendly visited” with her. Such a kind, gracious and knowledgeable person, she always shone most when talking about her family and her love of books and libraries. So thankful that she was a part of my life…

Dearest Kara. Both Greg and I (and Astrid) send you and your family our deepest condolences. What a life Joan lived, all her achievements both professionally and personally. She lived life to the fullest. I know we have just met but in the short time knowing you, I am totally positive, she has and will continue to love you deeply and be so very proud of you and your family.

To the family of Joan Read I offer my sincere condolences. I was a Library Tech student who found a co-op position at the local school board. Later, this turned into part time work on weekends and assisted me not only financially but in learning how libraries were run. Joan was a great person to work for and I have such wonderful memories. Sympathies to all.

So very sorry to hear of your loss. Joan was an amazing inspiration in my life. She was kind, patient and gave me my first opportunity in the Library world and I will always be grateful. Heaven has gained a true angel.

With our deepest sympathy to the Read family.... what a lovely, gracious lady your Mom was. My sister and I would see her every Sunday afternoon in the "lounge" of Mowat Wing in Extendicare, where our Mom lives. She always had a smile for us both, even (I think!) this past Sunday, New Year's Day. We will miss her friendly nod and smile. Brenda (Quinn) and Gwen (Devaney).

READ FAMILY: It has been a honor to be your parents caregiver.I made a decision years ago to be a part of there life's till the end. The last few days were hard with Joan knowing the end was near and the family so far away trying to get here Just know our talks were heard and she loved you all FLY MY ANGEL RIP Joan

Joan was an active leader in using computer technology... a pleasure to have worked with her

Dear Read Family members, We are sorry to hear of her death. I recall Joan from attending St Peter's Anglican Church. She was an excellent librarian and helped me with some of my research with the Diocesan Archives. She was very well connected in the librarian community. Also, she was a trustworthy Warden of St Peter's when we first arried at the Parish. She welcomed us in 1990 when we arrived from the Ottawa Valley. She was such a friendly, happy individual. Sincerely, Donna and Peter Brotherhood

Joan was a professional inspiration to our world of teacher-librarians who became involved in computer technology. Her pioneering brought about change.

Great memories of Joan both at St. Peter's and in my classroom at school. She was always so cheerful and helpful. As a Warden at St. Peter's she took on great responsibility. We were fortunate to have her and all her knowledge. At school she was a marvellous help with the library and librarians. I am so fortunate to have known her and to be recipient of her kindness.

To Joan’s family, I had the pleasure of meeting Joan while golfing at Dalewood. She was such a lovely lady. My condolences to your family. CarolAnn

WE ARE HERE TO HELP YOU EVERY STEP OF THE WAY