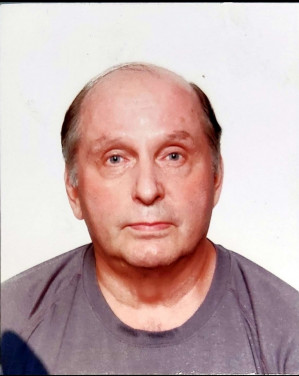 This obituary is protected by copyright by MacCoubrey Funeral Home Limited. Proudly serving Northumberland County in the province of Ontario, Canada. All rights reserved.

It is with heavy heart and great sadness the family of Richard Brooks announce his unexpected passing at the Northumberland Hills Hospital Monday, June 13, 2022, at the age of 71. He will be forever loved and cherished by his life partner and wife of 49 years, Janet Brooks (nee: Butler). Loved father to Krista (John) and Skye (Jamie). Adored grandfather to Chloe, Chanel, Megan, Liam, and Paiden. Richard will be deeply missed by his brother Bruce (Linda) as well as his sisters-in-laws Terry and Betty. He is pre-deceased by his parents Alfred and Alice Brooks and his brothers, Bob, and Allan. Richard had a love for animals. He is going to be missed by his fur-babies Matilda and Lily Rose. A celebration of life in Richard’s memory will take place at the MacCoubrey Funeral Home 30 King Street East, Cobourg, Ontario on Tuesday, July 12, 2022, from 1:00 -4:00 PM. There will be an open mic period from 1:30 – 2:30 PM where we encourage all those who knew Richard to share their own personal memories. In lieu of flowers, donations may be made to the Northumberland Humane Society.

Note: Your message of condolence will appear at the bottom of the page.
MacCoubrey Funeral Home Ltd. reserve the right to delete or remove any comments we find inappropriate or offensive

Rick was a mentor and friend to those who knew him at Eldorado. I am grateful to have known him.

Rick was a valued member of the Commons Park Community Project and he will be missed. Sincere condolences to Janet and his family.

We are deeply saddened to learn of Rick's passing. We have fond memories of many fun times together in our younger days. Bowling was our connection with him as kids in the YBC through to the Men's League. RIP old friend.

So sorry Janet on the passing of Rick. My condolences to you and family… may your memories of him, bring you some comfort during this difficult time.

I am very sorry to hear of Rick's death. Rick was part of "The Fabulous ROAD Hockey Team" from Victoria Street in Cobourg. We played road hockey from 9 years old until we left for university at the age of 19 (from 1960 to 1969) ......... almost 10 years. It was a great time for all of us neighbourhood kids ....... Rick Brooks, Bruce Brooks, Herm Jansen, Ted Bevan, Dave Young, John McIvor, Greg Gallagher, Jim Gallagher, John Gallagher, even Kathy Gallagher (at times played goal), and later two youngsters played .......Gordie Sharpe and Chris Markle ...... who were very young in the late 1960's. All the boys and girls that played ball hockey, in the 1960's, on Victoria Street, became very close. Rick also played all star softball with Herm Jansen and Greg and Jim Gallagher. Rick was a good athlete and a good friend but I had not seen him in years but that did not mean I did not think about him, and his brother, Bruce, and wondered what they were doing with their lives. After reading the other comments from family and friends ...... Rick remained a "good guy" his whole life. I look forward to playing some ball hockey with Rick in my next life .......... playing a simple kid's game ......... called "road hockey". I will be yelling for a pass from Rick (as always) !!!!! My prayers are with you Rick, and your family. Greg Gallagher

So sorry to hear of Ricks passing. I worked with him back in the day at Eldorado. He was awesome man. RIP Rick

So sorry to hear about Rick's passing condolences to the family

Janet Krista Skye and the entire Brooks Family our sincere condolences in the passing of Ric. We have many good memories of our neighbours on Mathew Street as the girls were growing up. May your happy memories sustain you through this difficult time. Debbie and Allan Elder

Sorry to hear and see my up the street friend leave this town. Sorry Janet and Family. Rick Mac

Love you always uncle Rick❤️ I know grama, granddad, uncle Bob, dad (Allan) and aunt Sharon greeted you with open arms. You were just taken far to soon but as long as you live in our hearts you will live on forever! Forever you niece, Sharon

Skye, Jamie, Liam and Paiden. So sorry for the loss of your dad, grandad. You are in my thoughts and prayers. He'll be watching over you and remember the memories. Hugs

I'm sorry Bruce/Linda to hear of your brother's passing. Condolences to you and your family.

Jan an family .So sorry to hear of Rick's passing.Condolences going out to all family an friends

I love you daddy and I miss you so much

I am very sorry to hear of Rick’s passing. My thoughts and prayers go out to his family. Rick was always a good friend while we were growing up…lots of street hockey and touch football…lots of laughs. He will be greatly missed. Herm Jansen

Janet and family, there are truly no words for your loss, just know that others are thinking of you and sending you hugs during this most difficult time, may your memories give you comfort in the days moving forward

WE ARE HERE TO HELP YOU EVERY STEP OF THE WAY